Let me preface by saying this is all conceptualizing based on the best information I can find.

None of this is experimental, verified, or based on long term observational studies. It’s not science, it’s just an attempt to understand fitness logically based on information pulled from scientific sources.

Evolutionary science defines fitness as success in propagating your genetic material. This definition does not initially seem to be related to our concept of physical fitness, or what is sometimes defined as physiological fitness, but in truth they are closely connected. Before an animal can reproduce it has to survive.

Everything we see as fitness or athleticism can be seen as directly relating to the ability to survive: strength, speed, power, agility, accuracy, balance, flexibility, endurance, and stamina. Every one of these elements can be crucial to survival. Fitness is the extent of the development of those physical qualities which improve survival. Fitness is survivability.

While this may seem less meaningful in the modern world were survival to reproductive age and beyond is virtually assured, these same qualities that allowed us to survive help us survive longer and healthier now, the strong muscles and dense bones that helped us hunt down prey or fight of predators in the past can help us survive car crashes today or in old age it can be the difference between a fall having fatal complications and being a mere inconvenience.

If you define fitness this way, it becomes clear that development of only one aspect of fitness is not sufficient. Being very very strong but unable to walk up two flight of stairs without stopping for breath would not have kept you alive in our evolutionary past, just as being able to run for miles and miles but being unable to lift heavy objects, jump powerfully or fight would not be sufficient.

I believe that a balanced physical development not only makes survival in the unlikely event of a life or death situation more possible, but it also improves quality of life throughout life. 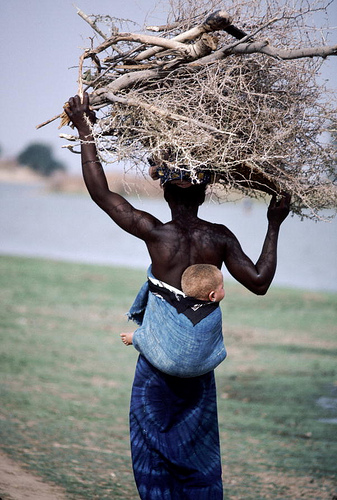 I view this as a sort of pyramid of fitness: 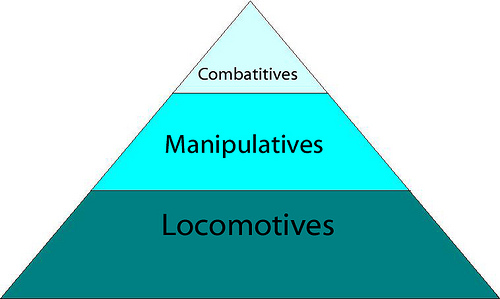 Each Level builds upon the one before it. An athlete must have the proper mobility, coordination and strength to do an air squat before they will be able to squat with a object balanced on his shoulder, and he should be strong lifting inanimate objects before he tries to lift a resisting force on his shoulder and toss it off. Each level in this pyramid represents increased motor complexity.

Looking at it as a pyramid also reflects a pattern of regularity of occurrence as well. While demands across these activities have varied over time, it seems safe to say that virtually always we have moved ourselves more often than outside inanimate objects, and inanimate objects more often than resisting opponents. Even soldiers in war spend far more time marching and lugging gear than actually fighting.

Finally, each level represents increasingly potential dangerous challenges. A push-up is safer than a bench press is safer than trying to push a opponent off of you who is trying to rain punches on your face.

An evolutionarily-fit athlete must have development across all of these levels.

It is clear that sports fall into these patterns as well. The most popular sports tend to demonstrate some level of capacity across all three realms of fitness. To excel at football, basketball, or soccer, one must be able to run and jump, manipulate an object effectively, deal with contact from other athletes, predict patterns and employ strategy. In short, sport appears to be sanitized rituals of group combat.

The basic idea here is that fitness can be defined as those physical capacities related to survival, and that balanced development of these capacities must be based on understanding the relationship between locomotive, manipulative and combative capacities.

In the next installment I will look into some examples of how this pattern is congruent with what we see in child play behavior and in the movement patterns of traditional cultures. 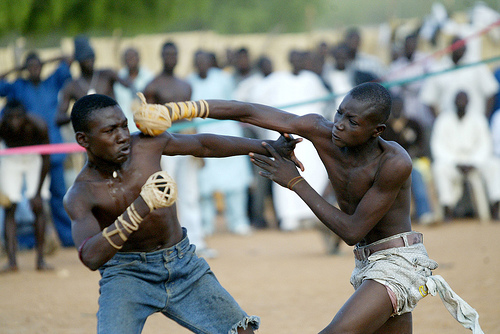