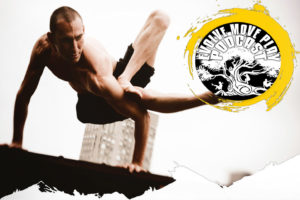 On this week’s episode of the Evolve Move Play podcast we talk with Aaron Cantor, an embodiment and movement teacher who has spent the last 15 years creating and sharing his Primal Practice with students all over the world. Over the course of an hour and a half we speak at length about using the incredible power of story telling to enrich our abilities to teach, learn, and live.

The art of telling stories is ancient. The Epic of Gilgamesh is the oldest recorded piece of literature, dating back to 2700 BC, and in it are common archetypes that have been found in myth and legends all over the world, which suggests that variants on The Heroes Journey predate writing by thousands of years. The fact that humans are deeply connected to and dependent on stories is further exemplified by the costs of the average feature film budget. Most films run between $70 and $90 million, but the blockbusters can soar into the hundreds of millions, hitting as high as $425 million in the case of James Cameron’s Avatar.

As instructors, one of the best ways we can convey complex layers of information and meaning to our students is through effective story telling. Utilizing common archetypal themes and characters to represent struggles and journeys that are central to the human experience will almost always hit closer to home than reciting plain raw data or statistics.

Aaron has been using stories to deepen his students connection to their peers, their movement, and their personal processes of discovery and progress. Come with us as we discuss those stories, as well as the search for meaning, embodiment, intention, awareness, and more.